In this module, you will create a basic map which will be used later as a basis for further demonstrations of QGIS functionality.

Vector data is arguably the most common kind of data you will find in the daily use of GIS. It describes geographic data in terms of points, that may be connected into lines and polygons. Every object in a vector dataset is called a feature, and is associated with data that describes that feature.

The goal for this lesson: To learn about the structure of vector data, and how to load vector datasets into a map.

It's important to know that the data you will be working with does not only represent where objects are in space, but also tells you what those objects are.

From the previous exercise, you should have the streets layer loaded in your map. What you can see right now is merely the position of the roads.

To see all the data available to you:

It will show you a table with more data about the streets layer. This extra data is called attribute data. The lines that you can see on your map represent where the streets go; this is the spatial data.

These definitions are commonly used in GIS, so it's essential to remember them!

Vector data represents features in terms of points, lines and polygons on a coordinate plane. It is usually used to store discrete features, like roads and city blocks.

The Shapefile is a specific file format that allows you to store GIS data in an associated group of files. Each layer consists of several files with the same name, but different file types. Shapefiles are easy to send back and forth, and most GIS software can read them.

Refer back to the introductory exercise in the previous section for instructions on how to add vector layers.

Databases allow you to store a large volume of associated data in one file. You may already be familiar with a database management system (DBMS) such as Microsoft Access. GIS applications can also make use of databases. GIS-specific DBMSes (such as PostGIS) have extra functions, because they need to handle spatial data.

(If you're sure you can't see it at all, check that the Manage Layers toolbar is enabled.)

It will give you a new dialogue. In this dialogue:

You will now see the first dialogue again. Notice that the dropdown select above the three buttons now reads "land_use.sqlite@...", followed by the path of the database file on your computer.

Note: Remember to save the map often! The map file doesn't contain any of the data directly, but it remembers which layers you loaded into your map.

Note: Depending on the version of QGIS that you are using, you may have a checkbox beneath your Layers list reading Control rendering order. This must be checked (switched on) so that moving the layers up and down in the Layers list will bring them to the front or send them to the back in the map. If your version of QGIS doesn't have this option, then it is switched on by default and you don't need to worry about it.

The order in which the layers have been loaded into the map is probably not logical at this stage.

For example, this layer order... 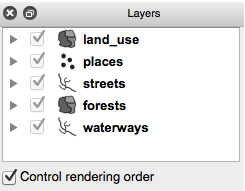 ... would result in some places being hidden as they run underneath the land_use areas.

To resolve this problem: 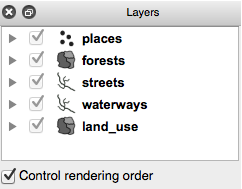 Now you've added all the layers you need from several different sources.

Using the random palette automatically assigned when loading the layers, your current map is probably not easy to read. It would be preferable to assign your own choice of colours and symbols. This is what you'll learn to do in the next lesson.

The symbology of a layer is its visual appearance on the map. The basic strength of GIS over other ways of representing data with spatial aspects is that with GIS, you have a dynamic visual representation of the data you're working with.

In other words, having proper symbology is not a luxury or just nice to have. In fact, it's essential for you to use a GIS properly and produce maps and information that people will be able to use.

The goal for this lesson: To create different symbology for any vector layer.

To change a layer's symbology, open its Layer Properties. Let's begin by changing the colour of the waterways layer.

Note: By default, you can also access a layer's properties by double-clicking on the layer in the Layers list.

In the Properties window: 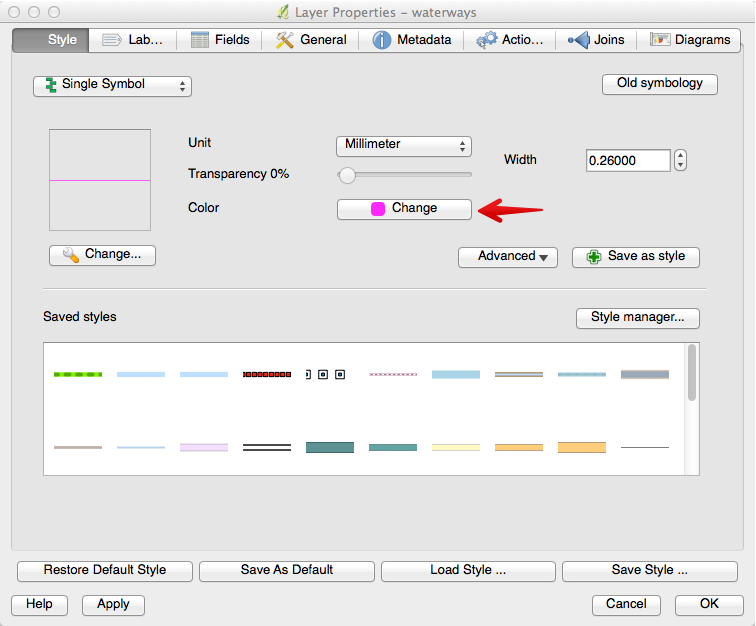 A standard colour dialogue will appear. 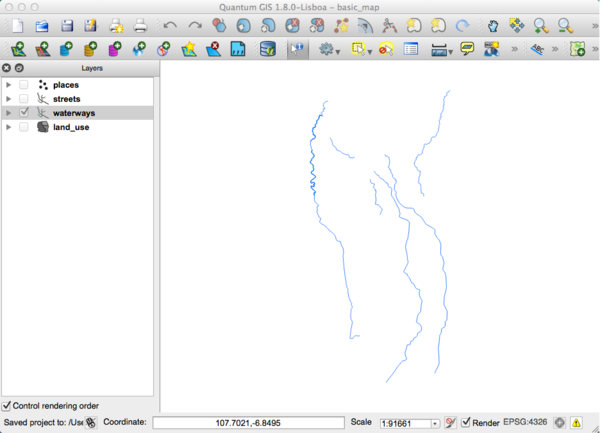 Change the forest layer to a new colour that you associate with forests.

This is a good introduction, but there is more to a layer's symbology than just its colour. To learn about some of the other options available, add the layer bandung_districts.shp. This layer has been made up of images originally taken by satellite, and showing various types of land cover in the area around Bandung.

Using this layer we can learn how to remove the lines so the map does not appear cluttered.

Under the Style tab, you will see the same kind of dialogue as before. This time, however, you're doing more than just quickly changing the colour. 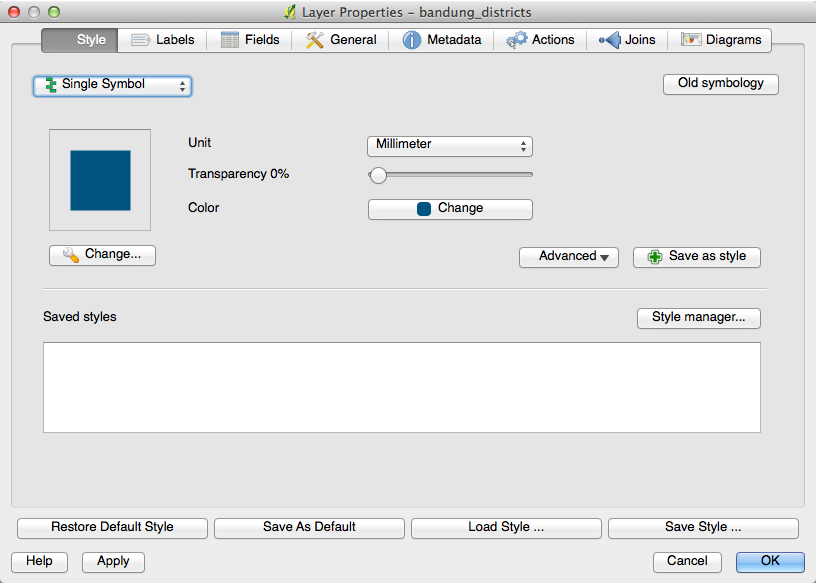 The Symbol properties dialogue will appear.

Next, we want to get rid of the lines between the different types of land cover.

Now the bandung_districts layer won't have any lines between the different areas of land cover.

Sometimes you will find that a layer is not suitable for a given scale. For example, a dataset of all the continents may have low detail, and not be very accurate at street level. When that happens, you want to be able to hide the dataset at inappropriate scales.

In our case, we may decide to hide the streets from view at small scales. This map, for example ... 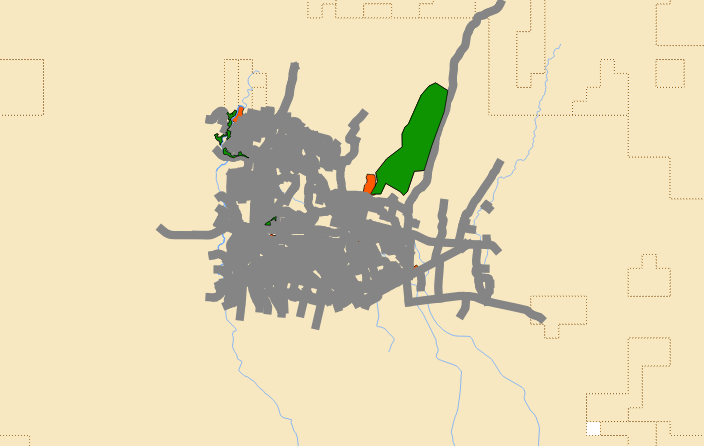 ... is not very useful. The streets are just a blob at that scale. 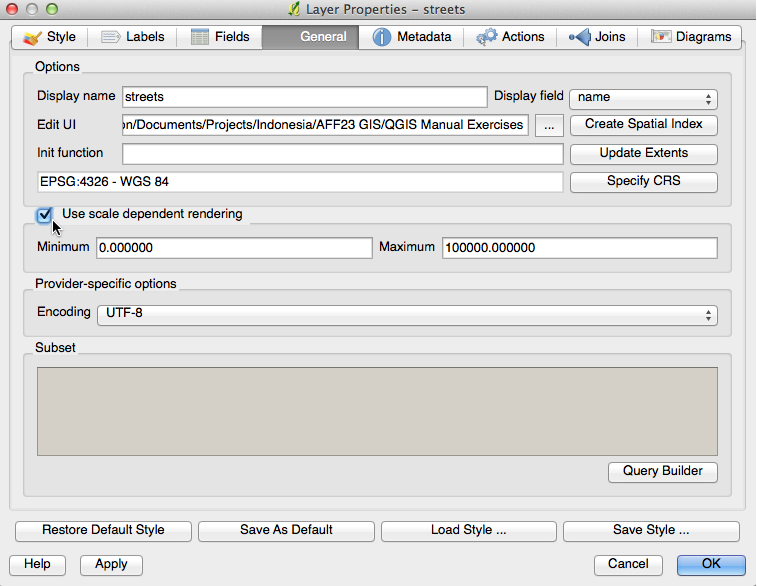 Test the effects of this by zooming in and out in your map, noting when the streets layer disappears and reappears.

Note: You can use your mouse wheel to zoom in increments. Alternatively, use the zoom tools to zoom to a window:

Now that you know how to change simple symbology for layers, the next step is to create more complex symbology. QGIS allows you to do this using symbol layers.

In this example, the current symbol has a dotted outline (i.e., it uses the Dot Line border style). 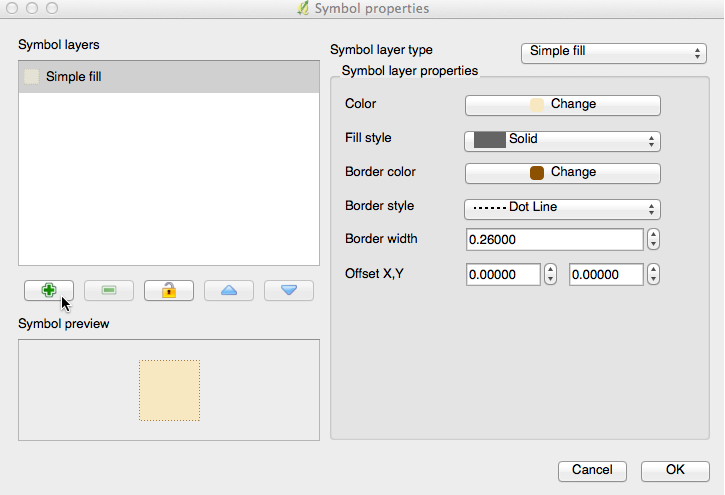 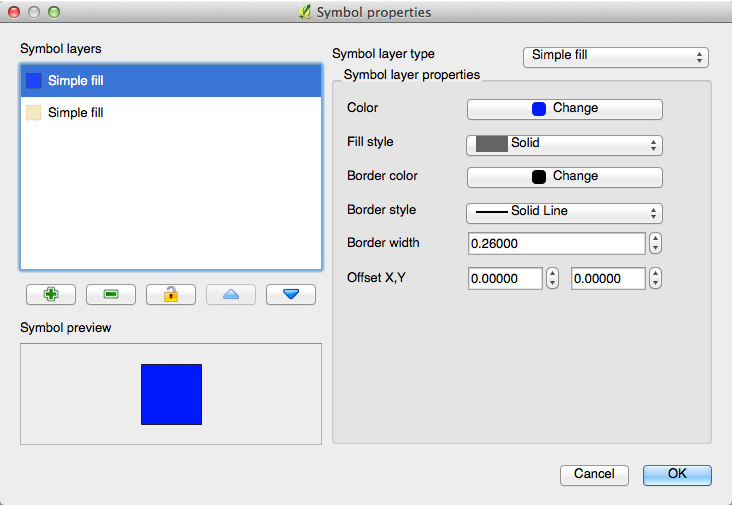 (It may appear somewhat different in colour, for example, but you're going to change that anyway.)

Now there's a second symbol layer. Being a solid colour, it will of course completely hide the previous kind of symbol. Plus, it has a Solid Line border style, which we don't want. Clearly this symbol has to be changed. 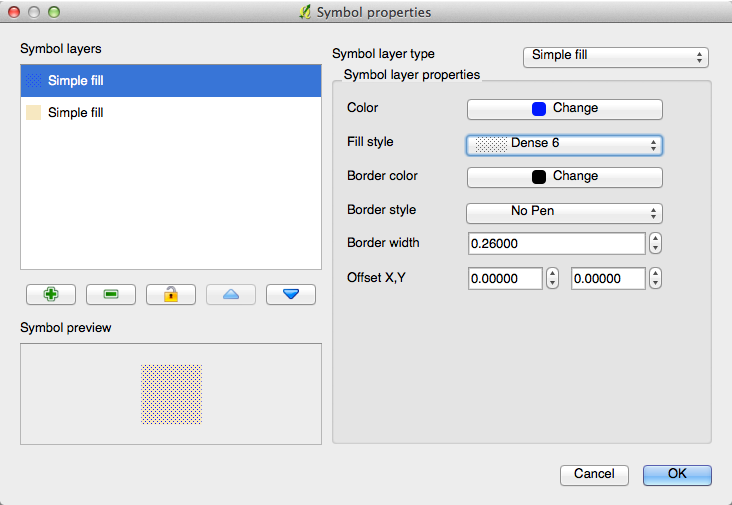 You can even add multiple extra symbol layers and create a kind of texture for your layer that way. 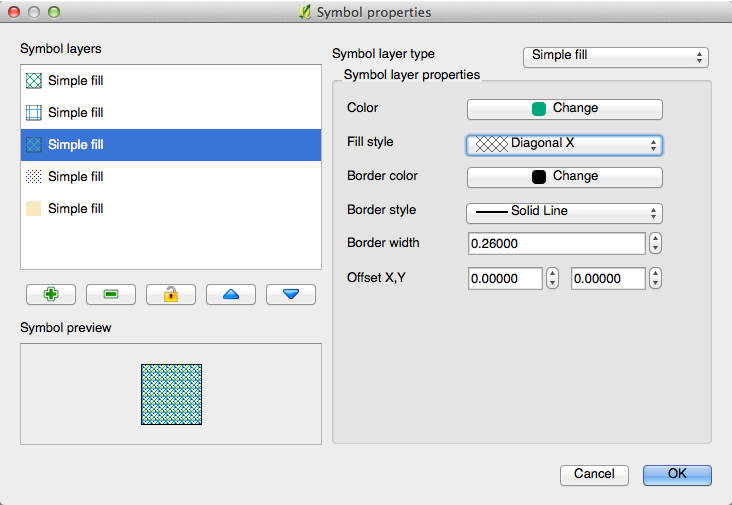 It's fun! But it probably has too many colours to use in a real map...

You'll notice that this happens: 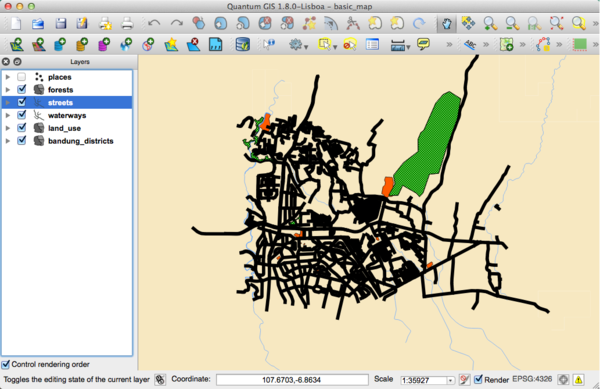 Well that's not what we want at all!

To prevent this from happening, you can enable symbol levels, which will control the order in which the different symbol layers are rendered. 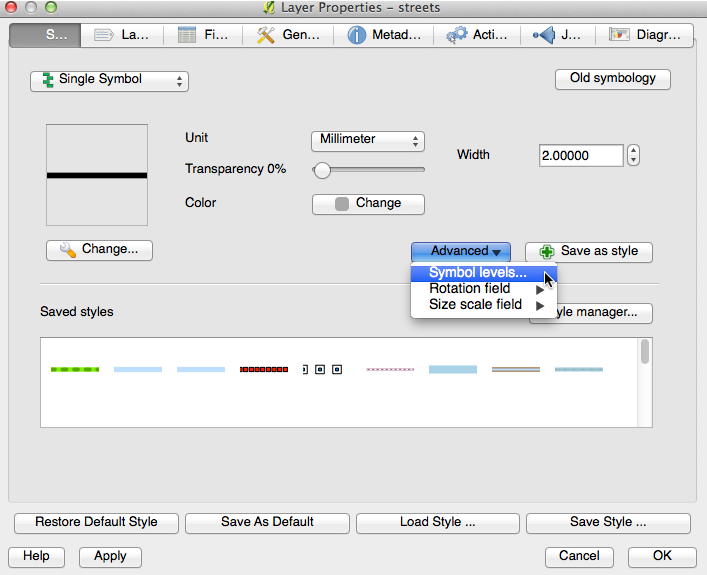 The Symbol Levels dialogue will appear. 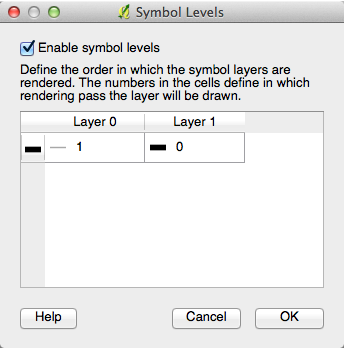 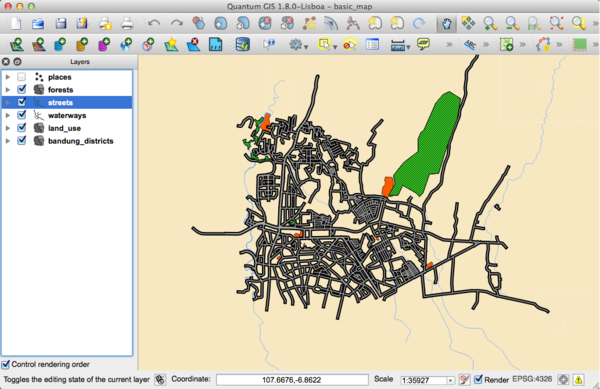 When you're done, remember to save the symbol itself so as not to lose your work if you change the symbol again in the future. You can save your current symbol style by clicking the Save Style ... button under the Style tab of the Layer Properties dialogue. Save your style under exercise_data/styles. You can load a previously saved style at any time by clicking the Load Style ... button. Before you change a style, keep in mind that any unsaved style you are replacing will be lost.

The roads must be dark gray or black, with a thin yellow outline, and a dashed white line running in the middle to make them resemble a real road.

Symbol levels also work for classified layers (i.e., layers having multiple symbols). Since we haven't covered classification yet, you will work with some rudimentary preclassified data. 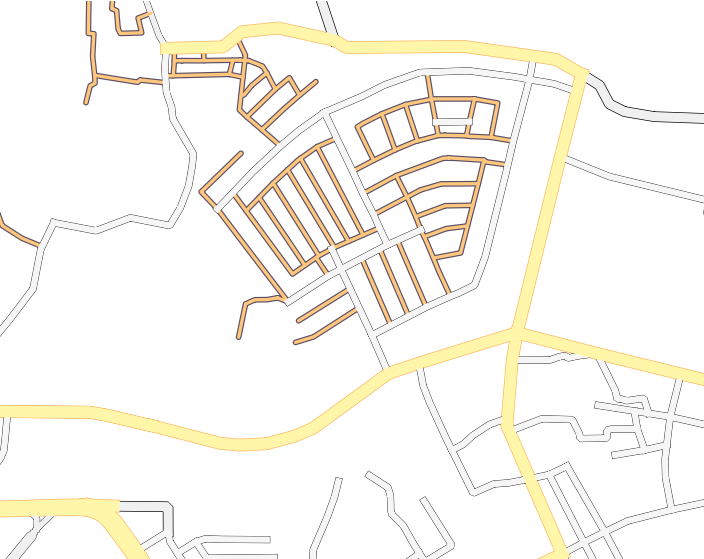 To continue with the exercise, open your original map again.

In addition to setting fill colours and using predefined patterns, you can use different symbol layer types entirely. The only type we've been using up to now was the Simple Fill type. The more advanced symbol layer types allow you to customize your symbols even further.

Each type of vector (point, line and polygon) has its own set of symbol layer types. First we will look at the types available for points. 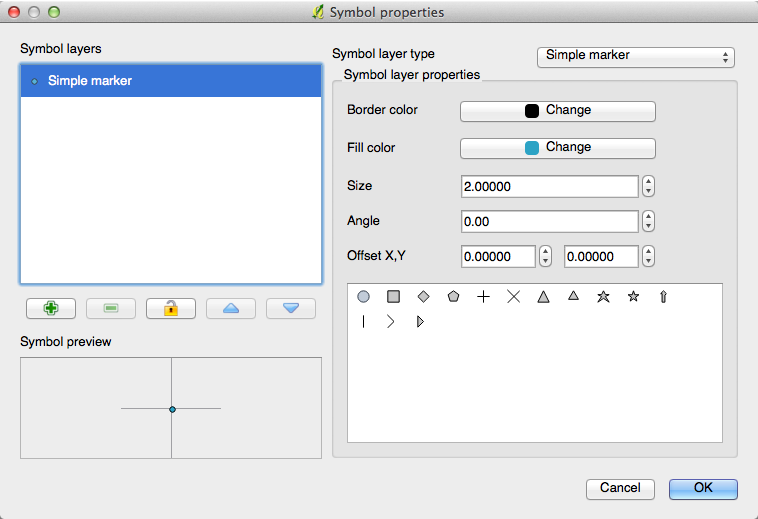 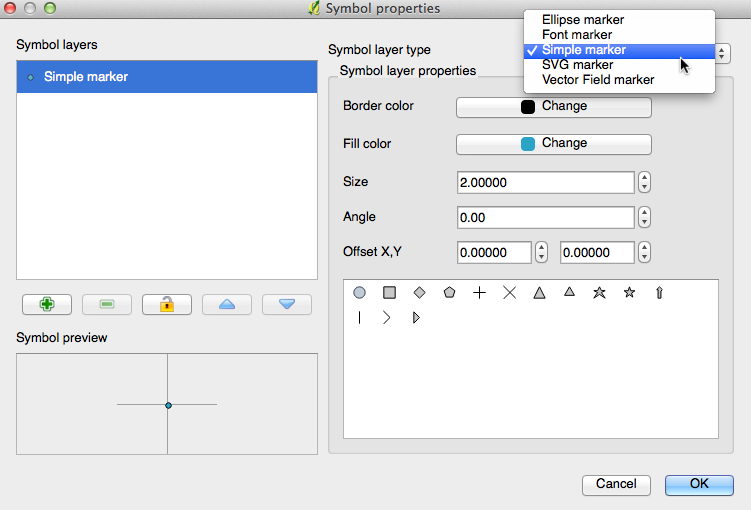 To see the various options available for line data: 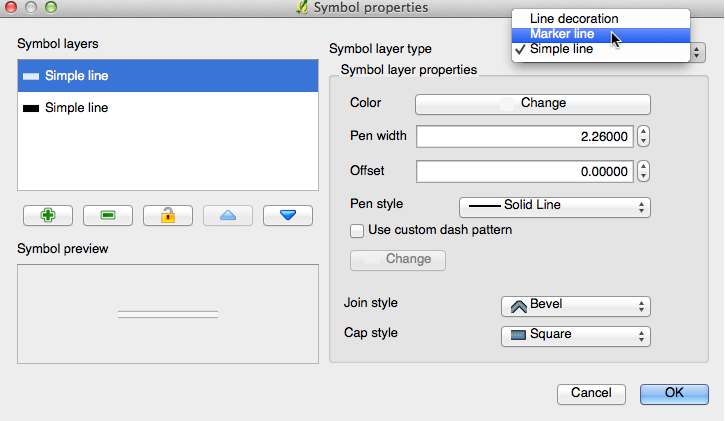 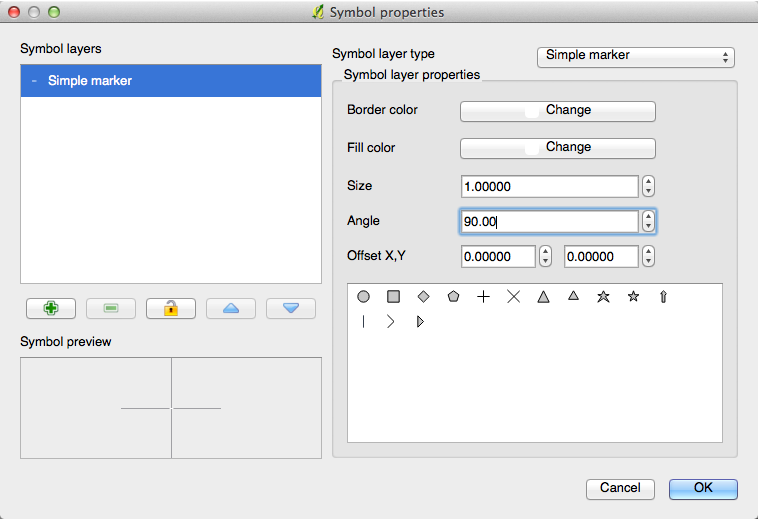 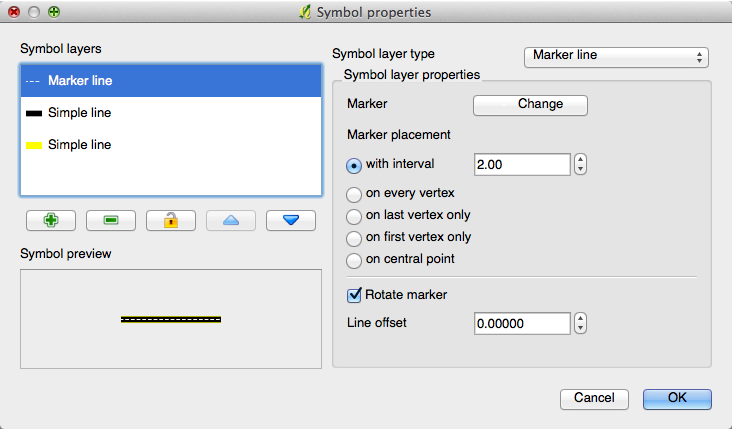 Once you have applied the style, take a look at its results on the map. If you look closely, these symbols change direction along with the road but don't always bend along with it. This is useful for some purposes, but not for others. If you prefer, you can change the symbol layer in question back to the way it was before.

To see the various options available for polygon data: 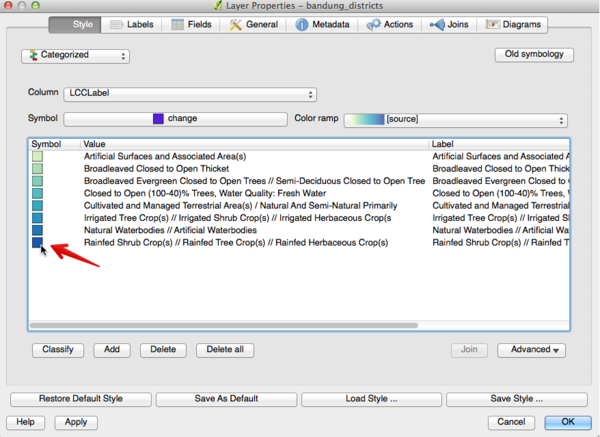 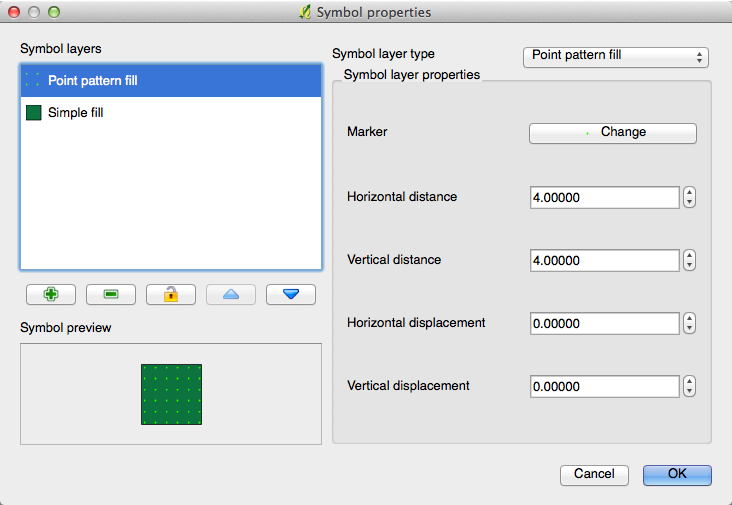 As a result, you have a textured symbol for your chosen layers, with the added benefit that you can change the size, shape and distance of the individual dots that make up the texture. The following screenshot shows we have changed two layers using the above method. 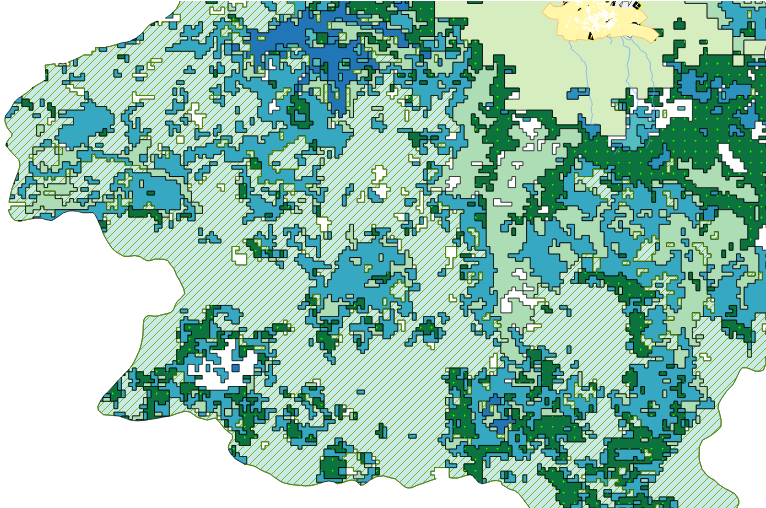 Changing the symbology for the different layers can transformed a collection of vector files into a legible map. Not only can you see what's happening, it's even nice to look at!

You can even create your own, custom SVG fill using vector editing software such as Inkscape, which is freely available on the internet.

Changing symbols for whole layers is useful, but the information contained within each layer is not yet available to someone reading these maps. What are the streets called? Which administrative regions do certain areas belong to? What are the relative surface areas of the farms? All of this information is still hidden. The next lesson will explain how to represent this data on your map.

Note: Did you remember to save your map recently?